In the factory which will be built on independent island parcel in a sloping topography in Çatalca Free Trade Zone, the architectural design was carried out in parallel with engineering designs related to physical environmental control and energy modeling in order to maintain the highest level of operational performance and user comfort of the building. In his way operating costs were optimized, ecological / green building goal, one of the basic parameters of plant design, was handled realistically while production / living habitats were being designed.

In the analysis of architectural settlement plans, in line with the classic business scenarios, engineering design works related to energy modeling were also decisive in determining the regions to be found in the structure of the factory warehouse, office, and production areas which differ in the frequency of use, purpose, necessary size and other parameters. In this context, the heat energy produced areas and the types and quantities of waste during the daily production cycle in the factory were handled with approaches that support the mechanical system in particular and were evaluated as a parameter in the creation of floor plans.

The building was handled through two parallel scenarios in horizontal and vertical levels. Horizontally, in terms of the neighboring structures, office block was placed on northeastern direction (the lowest point of the slope) with a large range of visual depth and efficient daylight, and the production halls were associated with the office block in a controlled way in which it would perceive the computer-controlled unmanned repository as the core. As a result, raw or finished goods produced on each floor horizontally (and vertically) were transferred to the warehouse wrapped around the production areas. Vertically, office and mounting blocks were raised on the co-production areas in line with the base and the departments of the office areas associated with the production directly were both held inside the office block and positioned in a nested way with the production. Due to the slope, the areas in line with the base belonging to the production whose natural light capacity is low were assigned to the areas which work more loudly and have fewer workers. Like a virtual vertical lift, the warehouse was designed to work as both an intermediate stop and bridge in a way not to break the continuity of the production as if the production and assemblies done in different floors were designed on  a single level.

Due to the production of chip and other small parts in the factory, in all manufacturing stages which started with the main carrier structure of the building and finished with the elaborate works, resistance to dust was a priority. In this context, the building was designed according to the new generation bubble floor plate reducing the surface area that dust can hold of instead of the frequently used cassette type flooring to create the large structural openings needed in production areas. In order to make the structure more resistant to seismic movements, high-tonnage press machines were placed on the base and its structural bond with the main office block was broken through dilation.

In line with the data obtained from energy modeling, the stratification of the shell, the front space occupancy rates, places and directions of solar control elements were identified. In the shell design, new generation of building materials such as zinc and aluminum whose operation and maintenance costs are low were preferred and different perspective of design were attempted. 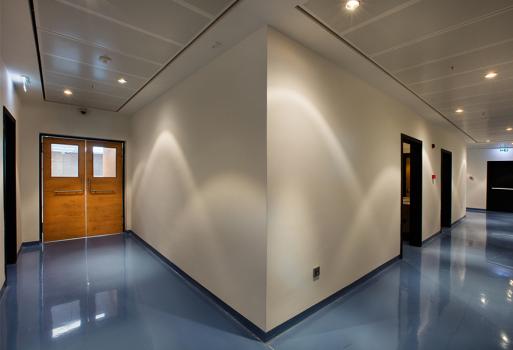 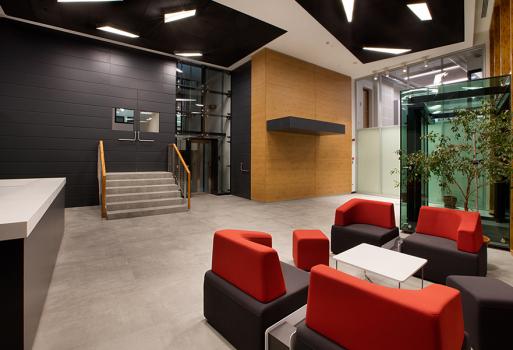 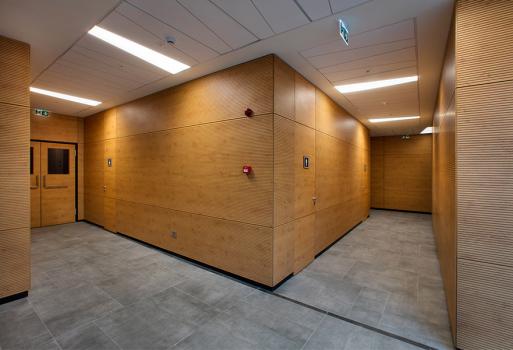